by insysadmin in Best Practices and Trends, Energy Saving

Inergy is excited to announce its new Automatic Pre-Conditioning (APC) service available to all our customers with a current license, and one of our demand control systems / load controllers installed.

Pre-conditioning is an approach to HVAC control that aims to pre-heat or pre-cool a home or business location for a pre-set period before an upcoming on-peak period.

The costs for both energy usage and demand are much higher during on-peak periods and any way to reduce either, esp. demand, can significantly reduce your utility bill at the end of the month.  Inergy’s demand control systems and load orchestration technology can already reduce our customers’ utility bill by ~35%; and sometimes up to 50% depending on the location and utility billing structure. However, costs can be driven even lower by taking advantage of a building’s innate “thermal mass“, also known as “thermal inertia”.

Thermal mass is the property of a building that enables it to store heat, providing “inertia” against temperature changes.  For example, when outside temperatures are fluctuating throughout the day, a large thermal mass within the insulated portion of a house can serve to “flatten out” the daily temperature fluctuations, since the thermal mass will absorb thermal energy when the surroundings are higher in temperature than the mass, and give thermal energy back when the surroundings are cooler, without reaching thermal equilibrium. This is distinct from a material’s insulative value, which reduces a building’s thermal conductivity, allowing it to be heated or cooled relatively separate from the outside, or even just retain the occupants’ thermal energy longer.

The net result of this is that your HVAC system will use less energy during the on-peak period – so cost less to run – if your home has been pre-cooled or pre-heated.

Typically this pre-conditioning is achieved through rather complicated thermostat schedules that take into account the home owner’s comfort requirements as well as the on-peak periods defined by their utility company.  This can become frustrating to manage esp. when on-peak periods change from season to season.  Also, attempting to manage temperatures with complicated schedules can often result in the opposite effect as it does not factor in “thermal mass”.  Basically, it makes far more sense to keep the thermostat schedule as simple as possible with minimal temperature changes – this way the benefits of “thermal mass” can be more readily realized as the cooling, or heating, to a preferred temperature is ‘deeper’, i.e., more of the home’s structure and furnishings have reached the desired temperature.  Indeed, Inergy recommends to all our customers that they follow very simple thermostat schedules that are mostly driven by their comfort requirements, rather than trying to match utility on-peak profiles, or outside temperatures.  Trying to cool a home where the day-time schedule allows the inside temperature to climb 5+ degrees over what is comfortable is often more costly than just maintaining the preferred temperature.

Inergy’s new APC service aims to work with a home’s thermal mass, and our customer’s preferred comfort range, as well as the utility companies’ changing on-peak profiles, with the minimum of fuss.  Once enabled the APC service will look ahead to the next on-peak period and automatically determine if pre-heating or pre-cooling by a pre-set temperature difference would be beneficial.  All the customer has to do set the time before the on-peak period begins (called the on-peak backoff), and the temperature difference (compared to their preferred comfort temperature settings) – see screenshot below – and our APC service will do the rest by figuring out when to start pre-conditioning, whether to heat or cool, or do nothing at all, and then send the appropriate commands to the enabled thermostats automatically. 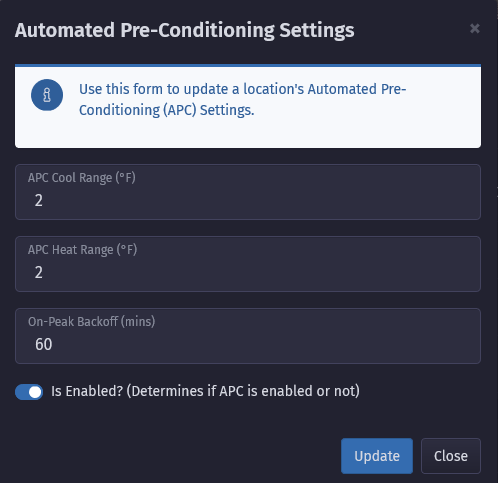 The chart below shows an example of an APC event in action.  One hour before the on-peak period was due to begin at noon (two hours would be more common), the thermostat heat setpoint was automatically increased by 2 degree.  This was sufficient to warm the home such that the customer’s comfort temperature was maintained throughout the on-peak period without the HVAC running much at all – just a short period at the beginning.  This was achieved not only via the APC service, but by making the most of the home’s thermal mass by keeping the home’s inside temperature within a relatively narrow range 24/7, not just when the customer was at home. 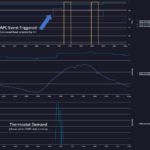